A conversation with Anastasia Allison, self-titled “adventurepreneur,” about creating your purpose, finding gratitude, and making your own magic. 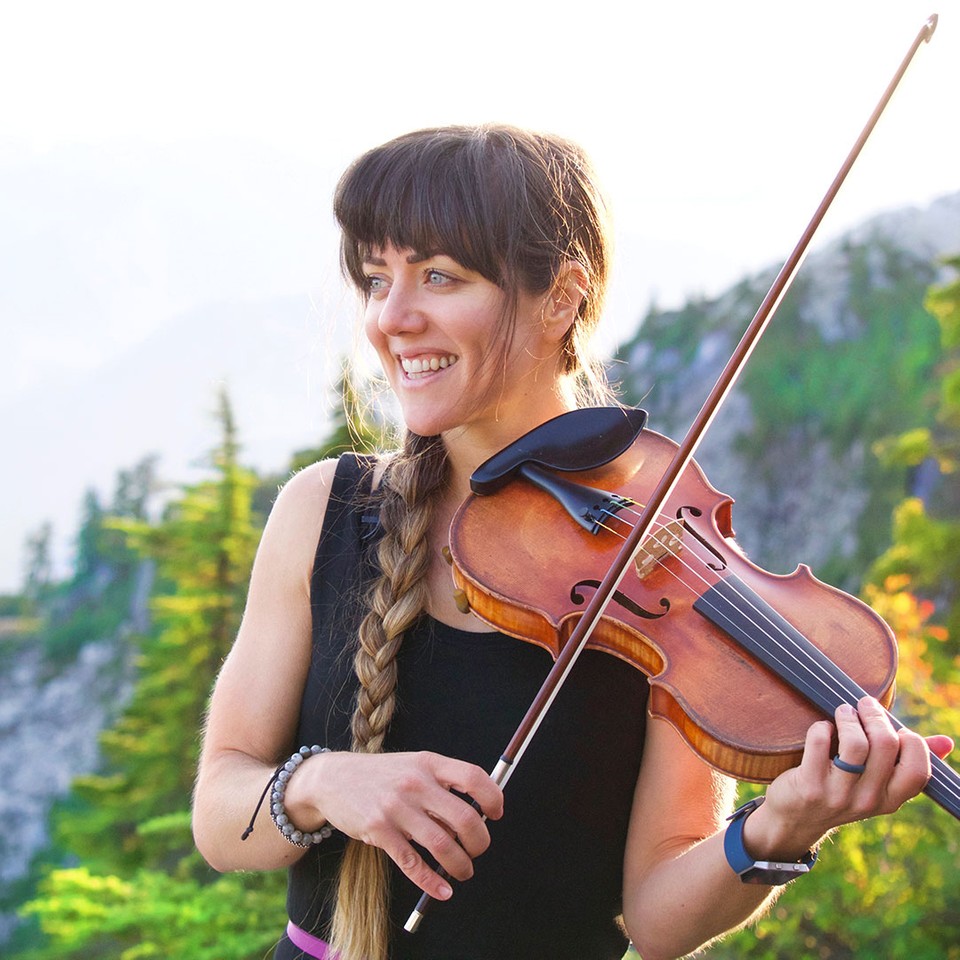 This is the first edition of The Purpose-Driven Entrepreneur Interview Series, a monthly content series that will feature frank conversations with inspiring entrepreneurs who have intentionally built their businesses (and lives) around a deeper sense of purpose.

Meet Anastasia Allison: violinist of The Musical Mountaineers, founder of Kula Cloth, adventure coach, and self-titled “adventurepreneur.” Yes, you read that correctly, adventurepreneur, a title created by Anastasia because she realized that what she wanted to be didn’t exist so she CREATED IT!

By overcoming other people’s limiting beliefs, along with her own hesitations, Anastasia has blazed her own trail in life and business, but not without doubts and fears. Keeping gratitude and appreciation at the forefront while throwing in a little bit of magic, she’s created an adventurous life and career led by her own unique purpose.

Anastasia uses her deep connection to adventure and the wilderness as a vehicle to help inspire change in the lives of other, like-minded adventurous women and men. I sat down with her to hear her journey and figure out what makes her tick.

The Trail to Anastasia’s Purpose

Believe it or not, when I first met Anastasia – almost two years ago now – she was transitioning herself out of a career in law enforcement. I was leading her through my web design process, which I often joke is much more than “just a website,” especially for heart-centered entrepreneurs. I go deep into the purpose behind a business and often discuss the personal journey my clients take to get to the point they are at when we work together.

Anastasia explained to me that after losing her job as a park ranger, she took a position as a police officer because that is what she thought she was suppose to do. It was an expected linear next step.

“Instead of asking myself, ‘Hey Anastasia, what do you really want to do with your life?’ I remember sort of panicking and thinking, ‘Well, Geez, I’m in law enforcement. I guess I have to go into law enforcement.’”

She never really stopped to ask herself if that was what she really wanted. And even though at the time she did find things to love about her job, she always felt a sort of longing for more, as if she wasn’t meant for the linear path she was following. But like many of us, paralyzed by fears (both her own and other people’s), she never fully took the leap into finding her purpose.

The turning point for her? A near fatal car accident. She recalls:

“It really shook that illusion of stability that I had been living under. And I thought that if my whole life can just be gone in a fraction of a second, then what am I afraid of?”

Leaving the “9-5” is often glamorized in entrepreneurial circles. But oftentimes, that’s not an accessible reality for many. Once the car accident rocked Anastasia’s sense of normalcy, she knew she had to make a change and she took her time to plan her next steps.

She began by doing something rather simple, but immensely powerful: she started to look for things to appreciate, to be grateful for, and she found satisfaction with where she was at the moment.

As she began focusing on the things that were going really well in her life, she explained that everything else started falling into place. She started taking steps towards where she wanted to be, and gained momentum where before there was just static. She’s been blazing that trail ever since, launching her adventure coaching business, inventing a piece of hiking gear for women, and inspiring thousands through her mountain concerts.

“I think each of us has something really special within us that we are meant to bring into the world. And it is the most incredibly fun process to discover what that is.”

The Power of Gratitude

I think it’s easy as an entrepreneur to compare, to judge, to benchmark your success against others. So I was definitely inspired by Anastasia when she shared that she has woven gratitude and appreciation into her entrepreneurial fabric. She consistently finds the subtle balance of having a vision for where she wants to go while finding deep gratitude and appreciation for where she is right now. This is a lesson I took to heart after our interview and think many entrepreneurs can learn from.

So what does Anastasia do when gratitude is hard to come by and she must go to battle with battle fears, banish her doubts, and get unstuck? She takes a breath and focuses on the thoughts that have led her astray.

“I really just try to savor where I am. Even if I haven’t reached the pinnacle of where I think I want to go, which of course will always be growing and expanding anyway, so you’ll never reach it. And when you can live in that state of appreciation and gratitude, it’s impossible to simultaneously feel fear or doubt.”

Fears and doubts come to everyone at some point, even the most practiced and successful entrepreneurs, but how we manage them is completely up to us. Anastasia has an action plan when it comes to managing hers. She doesn’t ignore her fears, instead she them head on. She recognizes the thought pattern, she acknowledges it, and then she puts it to the side and moves on to something completely unrelated, not letting those thoughts have more momentum than they deserve.

And of course as your business grows, she points out that it gets easier to let go of the negative thoughts.

“I think you get to this point as an entrepreneur where you sort of reach this point of no return, where your mission becomes bigger than who you are. And there’s just no stopping you at that point. And that is just such a fun place to be because you’ve picked up so much momentum and so much excitement and you are starting to see what you’re creating unfold in front of you. And it feels like magic sometimes, the most exciting thing ever. So, I think if you can trust the process to know that those magical moments are going to start to happen, once you start seeing them, it gets easier and easier to stick with it.”

Near the end of our conversation, I started noticing a thread in our chat. We kept talking about ‘magic,’ and I don’t mean “wave-a-wand-and-everything-will-be-okay” kind of magic. Instead, we kept coming back to this ideas that there is a certain magic that happens when things around you start to click, and your purpose becomes clearer.

“It feels like magic, but there’s no part of it that I believe is luck. I believe that I did the work and created that moment. And I think that’s exciting too, to know that I’ve been intentionally creating what I had envisioned and there’s just nothing cooler than that feeling.”

Anastasia believes that everyone is on the path that they are meant to be on, even if it feels like we made a wrong turn somewhere. Her advice? f you feel like there is no path for you, there is.

Cultivate gratitude and appreciation for where you are now, and don’t get lost trying to figure out the why or the how of where you want to go. The answers will come the more you clarify your vision and take action. Once she intentionally started to create her own life, Anastasia’s path illuminated itself…

“It is truly by following the good thoughts that are going to start to come your way, that a path for you to get from where you are now to where you ultimately want to go will start to illuminate for you. And the cool thing is that when it does start to illuminate for you, it’s really obvious for you to find that path because it’ll feel the most fun and the most joyful, and you’ll know when you’re on it.”

Want to learn more about Anastasia Allison and her path to becoming an adventurepreneur? Watch this powerful video by Working Against Gravity, WAG Stories Anastasia Allison: Pursuing a Passion for Trail Hiking.

Listen to the audio version of this interview here.

Systems Over Stress with Ashley Hogrebe

From Employee to Entrepreneur with Danielle R. Harris

The Journey to the Doodle Bus with Nikki May

My website uses cookies to ensure you get the best experience and analyze traffic. By using my site, you consent to the use of cookies. Read More. Accept
Manage consent

This website uses cookies to improve your experience while you navigate through the website. Out of these, the cookies that are categorized as necessary are stored on your browser as they are essential for the working of basic functionalities of the website. We also use third-party cookies that help us analyze and understand how you use this website. These cookies will be stored in your browser only with your consent. You also have the option to opt-out of these cookies. But opting out of some of these cookies may affect your browsing experience.
Necessary Always Enabled
Necessary cookies are absolutely essential for the website to function properly. These cookies ensure basic functionalities and security features of the website, anonymously.
Functional
Functional cookies help to perform certain functionalities like sharing the content of the website on social media platforms, collect feedbacks, and other third-party features.
Performance
Performance cookies are used to understand and analyze the key performance indexes of the website which helps in delivering a better user experience for the visitors.
Analytics
Analytical cookies are used to understand how visitors interact with the website. These cookies help provide information on metrics the number of visitors, bounce rate, traffic source, etc.
Advertisement
Advertisement cookies are used to provide visitors with relevant ads and marketing campaigns. These cookies track visitors across websites and collect information to provide customized ads.
Others
Other uncategorized cookies are those that are being analyzed and have not been classified into a category as yet.
SAVE & ACCEPT